Top 13 Car Essentials That You Should Always Have with You

2018 Honda Pilot Review
We use cookies to ensure that we give you the best experience on our website. If you continue to use this site we will assume that you are happy with it.OkPrivacy policy
Scroll to top

When they first appeared in the automotive world in the mid-1970s, catalytic converters seemed a miracle of technology. Environmental regulations were just being introduced. Smog was a major issue in large cities and automobile exhaust was a major factor. Car manufacturers could incorporate a catalytic converter into a vehicle’s exhaust system and the converter’s chemical reaction process would strip out the worst components of the internal combustion engine’s emissions. It also created a market for the catalytic converter cleaner.

Catalytic converters were great because they had no moving parts so they lasted a long time and they only had a limited effect on the engine’s performance. However, they came with two significant downsides. First, exhaust particulates built up inside a converter, gradually constricting and eventually clogging the exhaust system. Second, the metals that made a catalytic converter work (typically palladium or platinum) were expensive, so it cost a lot to replace one. Fortunately, catalytic converter cleaner is now available to extend your converter’s life by cleaning out your exhaust system rather than your wallet.

Garage hacks and Internet discussion groups would have you believe that you can clean a catalytic converter as a do-it-yourself project. Techniques range from running your car in a low gear to high-revving the engine to super heat the converter. Some even recommend doing this while the car is suspended on a garage rack while manning a fire extinguisher just in case. Others suggest banging on the converter with a hammer to dislodge larger particles. However, specially engineered catalytic converter cleaner solutions are widely available and so easy to use, especially when employed as part of your vehicle’s regular maintenance, that these would-be DIY types are better reserved for an hour’s YouTube entertainment.

1. What Is Catalytic Converter Cleaner?

A catalytic converter cleaner is typically a gasoline additive designed to burn in your engine’s normal combustion process so that it becomes part of your vehicle exhaust and strips deposits from the catalytic converter’s internal surfaces as it heads through the exhaust system.

2. When Is It Best to Use a Catalytic Converter Cleaner?

3. What If My Vehicle Is Displaying a “Check Engine” Light or Has Failed an Emissions Test?

Though a check engine light can result from many symptoms besides a clogged catalytic converter (see your vehicle’s manual for details), the relatively low expense of trying a catalytic converter cleaner may be worth trying as a solution to either of these issues.

5. Do I Need Any Special Knowledge or Equipment to Use a Catalytic Converter Cleaner?

The depends largely on your vehicle. Some vehicles have a designated catalytic converter light. Others have a general check engine light that is connected to more than one engine system. A number of customer reviewers discovered that, though the catalytic converter cleaner fixed the problem, their check engine light required manual resetting. Be sure to consult your vehicle’s shop manual and/or a professional mechanic to learn how this works on your vehicle.

Our catalytic converter cleaner review process involved assembling an extensive list of products offered. We focused online, as even the largest chain auto part/supply shops only carry a few inventory items. We narrowed the list by comparing professional reviews and customer review sites. Special consideration was given to reputable brands, pro/con lists from actual users, and especially the long-term effects of using each catalytic converter cleaner on a vehicle’s engine, exhaust system, and the converter itself. Only the seven products that met these criteria made our list.

The prices of items on our list remain in a small range: $ to $ (based on volume). There is a $ large volume item intended for mutliple applications. With this narrow of a price range, it is tempting to suggest buying each until one does the job. However, each product presents different features that set them apart. The best way to determine your price point is to decide first what you actually need.

Solder-It is both a catalytic converter cleaner and a de-odorizing solution that helps eliminate the sulfur (rotten-egg) smell often produced by catalytic converters. At $15, it is one of the least expensive items we reviewed for this list. It made the list because customers gave it rave reviews. It is also useable on a wide range of engines and a wide range of vehicle years. Besides cars and trucks, it is applicable for all-terrain-vehicles, motorcycles (street, racing, cruisers, and off-road-motorcycles), motor-scooters, snowmobiles, and personal marine craft engines. 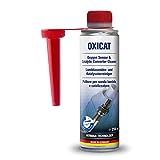 OXICAT was originally formulated for the European market, which has more stringent emissions regulations than the United States. It is certified to German TUV standards and is safe for gasoline, diesel, and hybrid engine usage. Besides the catalytic converter and oxygen sensor, OXICAT is designed to clean your vehicle’s entire exhaust system, dissolving soot and carbon deposits (with regular use, which is approximately every 5,000 miles).

Not only is “Guaranteed To Pass Emissions” the least expensive catalytic converter cleaner on our list (at $8), its name also puts its guarantee up front. The company will refund you twice what you paid if you do not pass your emissions test after using it. Of course, this is subject to some conditions, including the fact that it only works if your catalytic converter is merely dirty and not broken. The company claims its formula is the maximum allowable cleaning fluid concentration by US environmental regulations. With regular use (every 3,000 miles) it will super-clean your fuel system in addition to the converter and exhaust.

Red Line wants to make its fuel system/catalytic converter cleaner easy to use. The Amazon page features a vehicle compatibility check system so you can quickly determine this before you buy. The bottle is designed with a built-in funnel spout for no-spill pouring it into your fuel tank. The product cleans fuel injectors, carburetors, valves and combustion chambers with a combination of detergents and oils meant to clean and protect moving parts as well as the exhaust system. It is also safe for continual use and the company recommends regular application to extend engine life.

One of the most popular products on our list, Max-Clean is more than a catalytic converter cleaner. It claims to clean pretty much every part it can reach inside your car, from the fuel lines to the engine and the exhaust system. It made the list because this specifically includes particulate buildup in the exhaust pipes and catalytic converter. The manufacturer claims that Max Clean is tested safe on “the entire spectrum of engines on the road”, including old, new, gasoline, diesel, and even turbocharged. However, we still recommend checking your vehicle’s shop manual. The company also boasts a 3.2% increase in fuel economy and an average of 2.3% horsepower boost after one usage. Also good for rough idle and engine knocking and pinging.

In contrast to some of the we-clean-everything positioning of other items on our list, Cataclean is highly focused on just your exhaust, oxygen sensor, and catalytic converter. As its three-liter packaging would indicate, it is intended for long-term treatment (over 30 gallons of gasoline) and it is only for gasoline engines. The manufacturer states that it will reduce carbon buildup throughout your engine and exhaust, restoring your vehicle’s horsepower and power-train output.

This is the second Cataclean product that made our list. This one is focused on engine gasket life extension in addition to internal cleaning. Like the previous product, it cleans carbon build-up from fuel injectors, cylinder heads, oxygen sensors, and your catalytic converter. Unlike the previous product, this one is safe for gasoline, diesel, and hybrid engines. Independent testing showed that Cataclean lowers emissions significantly.

Labeling on this product specifically recommends pre-emissions test usage and that it may extend the life of your oxygen sensors and catalytic converter, as well as the engine. Regular usage (four times a year) is recommended for best results. By volume, this is the most expensive product on our list, but customer testimonials back up its effectiveness. Not only does it do the job on your catalytic converter, it also remedies issues including loss of power, hard starts, knocking, and hesitation.

With so many well-regarded and competitively priced products focused on addressing your catalytic converter cleaner needs, it initially seemed difficult to pick a clear standout. It was tempting to suggest that, with such a low price-point, why not try them all until one works for your needs? However, when we looked at the extremes, we found two winners and one favorite to recommend.

For the budget-conscious user who just wants a quick fix to pass an emissions test, we have to recommend the $ CRC 05063 Guaranteed To Pass Emissions Test Formula. The testament is in the product name and consumer reviews say it does what it claims. Though the price is great, beware if you want to claim the guarantee. Read the box closely. It comes with many hoops and restrictions.

For the long-term-treatment minded (who also happen to have a gasoline engine), we recommend either of the two Cataclean products on the list. By insisting on selling a larger volume of the 120018CAT Cataclean Fuel And Exhaust System Cleaner, the company’s emphasis on long-term treatment is evident. If you do decide to buy the three-liter bottle, be sure to add a funnel to your shopping cart so you can pour it in your tank.