You are here: Home / Blair

This author has yet to write their bio.Meanwhile lets just say that we are proud Blair contributed a whooping 7 entries.

OXICAT was originally formulated for the European market, which has more stringent emissions regulations than the United States. It is certified to German TUV standards and is safe for gasoline, diesel, and hybrid engine usage. Besides the catalytic converter and oxygen sensor, OXICAT is designed to clean your vehicle’s entire exhaust system, dissolving soot and carbon deposits (with regular use, which is approximately every 5,000 miles).

Not only is “Guaranteed To Pass Emissions” the least expensive catalytic converter cleaner on our list (at $8), its name also puts its guarantee up front. The company will refund you twice what you paid if you do not pass your emissions test after using it. Of course, this is subject to some conditions, including the fact that it only works if your catalytic converter is merely dirty and not broken. The company claims its formula is the maximum allowable cleaning fluid concentration by US environmental regulations. With regular use (every 3,000 miles) it will super-clean your fuel system in addition to the converter and exhaust.

Red Line wants to make its fuel system/catalytic converter cleaner easy to use. The Amazon page features a vehicle compatibility check system so you can quickly determine this before you buy. The bottle is designed with a built-in funnel spout for no-spill pouring it into your fuel tank. The product cleans fuel injectors, carburetors, valves and combustion chambers with a combination of detergents and oils meant to clean and protect moving parts as well as the exhaust system. It is also safe for continual use and the company recommends regular application to extend engine life.

One of the most popular products on our list, Max-Clean is more than a catalytic converter cleaner. It claims to clean pretty much every part it can reach inside your car, from the fuel lines to the engine and the exhaust system. It made the list because this specifically includes particulate buildup in the exhaust pipes and catalytic converter. The manufacturer claims that Max Clean is tested safe on “the entire spectrum of engines on the road”, including old, new, gasoline, diesel, and even turbocharged. However, we still recommend checking your vehicle’s shop manual. The company also boasts a 3.2% increase in fuel economy and an average of 2.3% horsepower boost after one usage. Also good for rough idle and engine knocking and pinging.

In contrast to some of the we-clean-everything positioning of other items on our list, Cataclean is highly focused on just your exhaust, oxygen sensor, and catalytic converter. As its three-liter packaging would indicate, it is intended for long-term treatment (over 30 gallons of gasoline) and it is only for gasoline engines. The manufacturer states that it will reduce carbon buildup throughout your engine and exhaust, restoring your vehicle’s horsepower and power-train output.

This is the second Cataclean product that made our list. This one is focused on engine gasket life extension in addition to internal cleaning. Like the previous product, it cleans carbon build-up from fuel injectors, cylinder heads, oxygen sensors, and your catalytic converter. Unlike the previous product, this one is safe for gasoline, diesel, and hybrid engines. Independent testing showed that Cataclean lowers emissions significantly.

Labeling on this product specifically recommends pre-emissions test usage and that it may extend the life of your oxygen sensors and catalytic converter, as well as the engine. Regular usage (four times a year) is recommended for best results. By volume, this is the most expensive product on our list, but customer testimonials back up its effectiveness. Not only does it do the job on your catalytic converter, it also remedies issues including loss of power, hard starts, knocking, and hesitation.

With so many well-regarded and competitively priced products focused on addressing your catalytic converter cleaner needs, it initially seemed difficult to pick a clear standout. It was tempting to suggest that, with such a low price-point, why not try them all until one works for your needs? However, when we looked at the extremes, we found two winners and one favorite to recommend.

For the budget-conscious user who just wants a quick fix to pass an emissions test, we have to recommend the $ CRC 05063 Guaranteed To Pass Emissions Test Formula. The testament is in the product name and consumer reviews say it does what it claims. Though the price is great, beware if you want to claim the guarantee. Read the box closely. It comes with many hoops and restrictions.

For the long-term-treatment minded (who also happen to have a gasoline engine), we recommend either of the two Cataclean products on the list. By insisting on selling a larger volume of the 120018CAT Cataclean Fuel And Exhaust System Cleaner, the company’s emphasis on long-term treatment is evident. If you do decide to buy the three-liter bottle, be sure to add a funnel to your shopping cart so you can pour it in your tank. 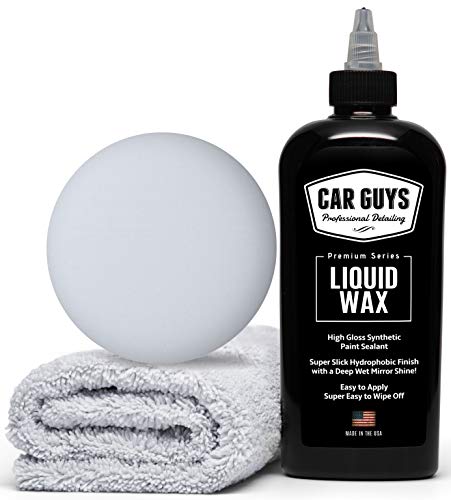 The thing with car waxing and detailing is that some products need regular applications each year. Not with CarGuys Liquid Wax. They claim you only meed to apply their product one or two times a year. This is good news for people who don’t like to wax their cars often.

Developed with CarGuys very own nano-technology, each formulation is designed to go deep into your paintwork and last for a long time. The liquid form makes it easy to apply in multiple ways. Just apply a little amount and your car will look as good as new! 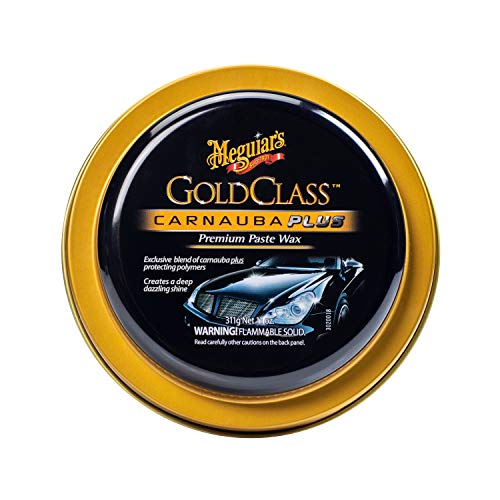 If you are a fan of Meguiar and don’t like their synthetic wax formulas, there’s an organic alternative. The Gold Class Carnauba Plus is a premium-grade carnauba in paste form. This wax goes deep into your paint’s surface to bring out the color and shine of your car.

Carnauba wax is naturally hydrophobic, so your car gets extra protection from water stains and harmful UV rays. Despite its paste form, this wax is easy to apply and buff. 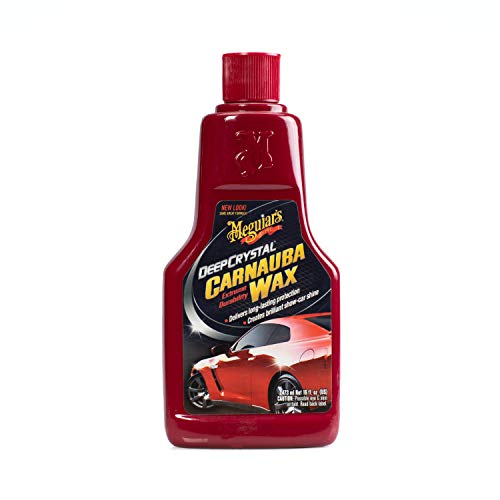 Carnauba wax is proven to be a natural coat for exterior finishes. It provides a natural barrier that protects from sun, dirt, dust, oil, and water stains. It also enhances a surface’s natural color and gives it a deep shine.

Meguiar’s liquid formula makes the wax easier to apply. You can apply the solution on a microfiber towel and apply with your hand, or use a motorized buffer for a more consistent and deep application. Meguiar’s formula is proven to be human-safe, non-corrosive and non-toxic.

A 16-ounce bottle can be purchased for around $10. 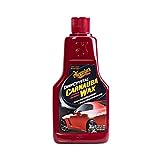 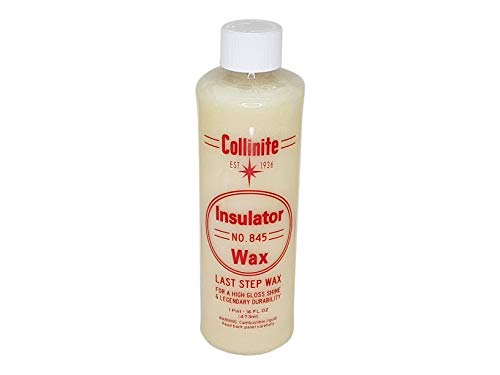 If you care about a brand’s credibility, then the century-old status of Collinite may be enough for you. This brand has been protecting and polishing since 1912. This decades-old formulation has been used not only on consumer appliances and machines but also in industrial-grade machineries and equipment in the military, aeronautics, construction, and automotive industries.

The 845 is the cream of the crop, the company’s crown jewel of waxes. Its main selling point is its insulation property. It is designed specifically to protect against fires, electric damage, high-voltage failure, and accidental explosions.

That it can withstand these extreme conditions means protecting your car is a breeze. Apply this on your ride and rest assured that you’ll get the best protective coat you can ever wish for. Plus, it gives off a high-gloss shine and water-beading qualities. 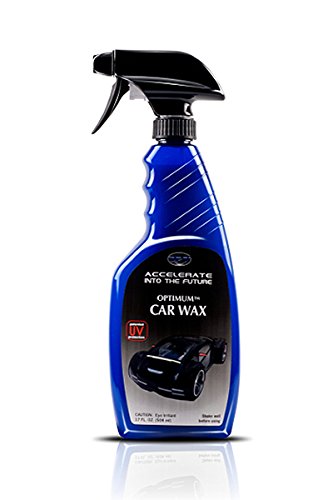 Car detailing doesn’t always apply to your car’s paint job. It also covers other parts like chrome accents, metal decors, windshield, etc. If you are looking for a flexible wax that can be used on any surface, then Optimum lives up to its name.

The SW2008P Car Wax can be applied on any exterior material like glass, metal, paint, chrome, plastic, and rubberized surfaces. Because it comes in a spray-on liquid solution, it is easy to pour, apply and finish.

Although synthetic, it contains no corrosive or toxic chemicals or vapors (safe both for you and your surfaces). Best of all, it dries easily and stays on for as long as five months. 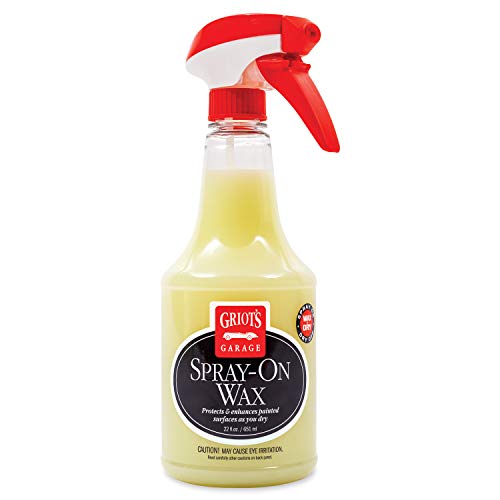 If you are looking for the best car wax for budget-conscious people then your inexpensive option is Griot’s Garage Spray-on Wax. It has a carnauba base that comes in spray-on liquid form, which means it is easy to pour and apply.

It dries easily and can be used on any surface. It can also be used on existing wax coats. Because it contains carnauba, your car’s paint job will enjoy an extra level of protection from UV rays, dirt and water stains.

Carnauba wax is also the best in bringing out a showroom shine in your car; the color’s depth will come out and the gloss finish will shine through. 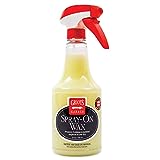 Before we dive deep into the best car wax brands in the market, here’s some FAQs we answered for you.

Car wax is any natural or synthetic formulation insoluble in water but soluble in fats or oil (lipophilic) and other solvents. Chemically, its main component is hydrocarbon. Like most wax products, car wax is sourced from plants (e.g. carnauba), animals (e.g. honeybees), petroleum, or silicone (e.g. synthetic).

Car wax performs many functions. First off, it brings out the color and shine of your car’s paint job. By applying a thin layer and buffing it, your car gets a glossy, wet shine finish.

Wax also forms a reflective barrier that bounces off light, so even your oldest hatchback can have that showroom finish. Second, it adds a beautiful finish to your car’s other parts such as chrome linings, metal accents, plastic surfaces, wood decors, glass finishes, ceramic touches, and even rubber parts.

In addition, because wax is naturally insoluble in water, it repels water easily. Thus it protects your car from water stains (by forming water beads that roll off) and moisture. Heavy rain won’t do much damage to your freshly waxed sedan.

So even if you’re living in sunny Florida, you can drive your coupe without worrying about sun damaging your car (don’t forget your own sunscreen, though). Last, a wax also has sealing properties. Because of its water repelling quality, water cannot seep into your waxed surfaces. Thus, it provides a protective seal that protects against water damage like rot or corrosion

3. Do You Really Need Car Wax?

If you really love your car, yes you need the best car wax your budget can afford.

4. What Are the Benefits of Car Wax?

The best car wax offers the following benefits: water sealing, deep colors, mirror shine, and protection from the sun, dirt and other elements.

5. What Are the Alternatives for Car Wax?

Commercially, wax base is the most popular among car detailers and owners. But if you want an alternative, there are polishes and finishes based on different ingredients. The most common is silicone-based polishes, but they are often abrasive and hazardous to your health.

You can also consider DIY car polish like using baking soda or toothpaste but we don’t really recommend it; not when the car wax on the market today is very affordable.

6. What Should You Look for When Buying the Best Car Wax?

The best car wax for you all boils down to your personal preferences. Do you like to use plant-based material? Then go for carnauba-based waxes. Otherwise, go for synthetic ones.

So you chose carnauba. Do you prefer it in paste or liquid form? Pastes are much more concentrated thus economical to use. On the other hand, liquid waxes are easier to use but can run out quickly.

Always remember: some waxes may require other finishes, so it is best to check each product carefully before buying.